Beast is Universal’s latest big action flick and sees Idris Elba take on one of the world’s deadliest predators – a rogue lion. Packed with a top-notch cast, plenty of thrills, and beautiful South African scenery, this is a film where family ties prove to be at the heart of survival. We spoke to Leah Jeffries and Iyana Halley, who stars as the Elba Girls in Beast, to celebrate the wild release.

Set in the South African bush, Beast follows Dr. Nate Samuels (Elba), who brings his two daughters, Norah (Jeffries) and Meredith (Halley), to his late wife’s childhood home. However, their vacation isn’t so relaxing that a lion whose pride was killed by poachers is out for murderous revenge.

As well as an angry lion looking for their blood, the thriller shows the strained relationship between the family, as Nate and his daughters navigate feelings of resentment and regret in their mortal situation. During our interview, Jeffries and Halley talk about what it was like filming their tough roles, working with CGI lions, and advice Elba gave the two young stars.

The Digital Fix: Leah, I read that you were really excited to shoot in Africa. What was your favorite moment during production?

Leah Jeffries: Everything was just my favorite moment. Like, I don’t think anyone understands how much I literally enjoyed filming that. I really want to go back and reshoot everything again. But my favorite part was just us laughing all the time on set.

We were in the most disturbing moments and filming the most disturbing things. And I don’t know; I could just hear us laughing and joking and making fun of each other. I was like, ‘Oh my God, this is so hilarious. I really want to do this again. The first day we were doing something super serious but yeah, we were still laughing.

The Digital Fix: One of the best things about Beast is the relationship between Meredith and her father. It’s complex. Iyana, you have very good back and forth with Idris Elba. How was it working with him?

Iyana Halley: Working with Idris was a dream come true for someone, and he is truly humble. He’s really nice. I didn’t know what to expect at first because I was like “he’s a celebrity”. Like, ‘how was he going to act?’ But he was so cool. Very funny. We bonded a lot. A lot of our scenes are in cars, and we had a lot of downtime. So we definitely spent it making jokes and hanging out.

And again, Meredith’s relationship with her father is complex. So it’s like once the cameras started rolling, I had to pretend I didn’t really like this guy, even though we were just laughing before. So it was really funny. It was like an on and off switch.

The Digital Fix: You mentioned the car scenes, which are pretty scary for the most part. This film is quite intense, with a lion constantly attacking the vehicle. I want to know, what was the biggest challenge during the filming of Beast for you two?

LF: Well, one of the hardest times for me was…I think I have two. But I think it was when I had this scene all by myself and I had to go through this little maze, and there was blood on my hands and everything. And then I look ahead of me, and there’s someone who just got confused by the lion.

The big man: The best films of Idris Elba

It happened at the beginning of the movie, when I had to scream and I had the most fearful face ever because I was so scared of what had happened. And I think that was really the hardest part because I don’t shout a lot.

And also because seeing blood on your hands and then seeing something right in front of you that’s pretty scary even though it’s fake is like “oh my god”. And then the camera was only on me, and I was all alone. So I think this one has been a tough time. 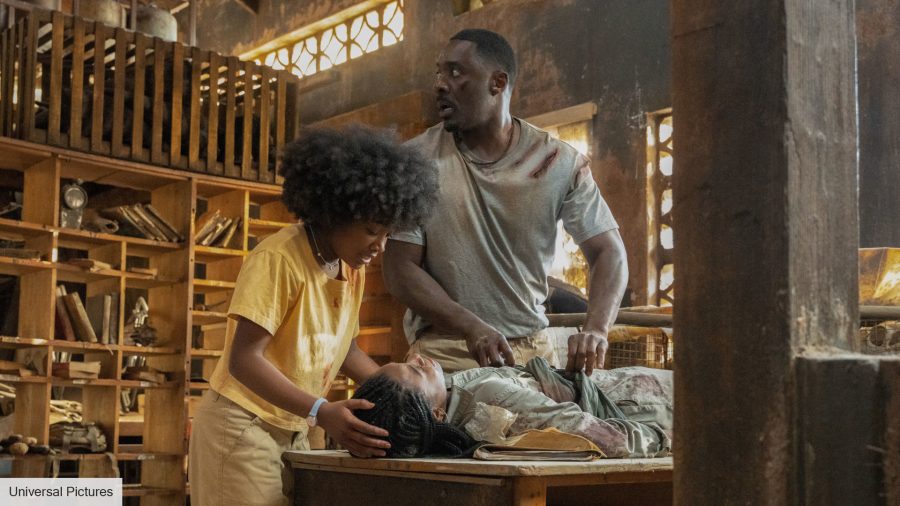 HI: I think one of the hardest moments for me was the scene where Mer is arguing with her dad. I was super nervous about it. I was just in my head most of the time, but Idris is so cool.

He gave me a few words of affirmation. He just said to me, ‘you have that, you can do it’. So guess what? I was like, okay, cool. I have this; I can do it. And I was able to do it, and again I watched it yesterday, and I felt very happy with how the scene turned out.

The Digital Fix: Leah, you’re in the new Disney Plus TV series Percy Jackson as Annabeth.

The Digital Fix: Did Beast give you any advice or tips that you’re going to take with you to this show?

LF: Well, Beast taught me to cry on the spot, to be scared, and to be super comedic too – but you know, that just comes from my natural self. But yes, Idris gave me lots of tips and tricks to do lots of things on the spot and not take too long to prepare.

And even though they are like two different things. Some of these tips can also be used in Percy Jackson and such, so I’m really glad Beast helped me because it helped me in other shows and movies as well.

The Digital Fix: So we won’t see Annabeth being chased by lions, will we?

The digital solution: I want to come back to your characters. How did you prepare for these roles? Because obviously, as you said, Beast is pretty heightened. You both shout a lot; you are chased by a lion. What did you do to prepare for the action-packed scenes?

HI: For me, for the emotional journey, at least, I started journaling and trying to create different scenarios in my head because Mer is very emotional for, you know, for proper reasoning.

And then for the action part, I had to watch a lot of YouTube to see how people react to lions attacking them and what injuries look like because a lion is never drawn. So I had to think about all of that and then remember my lines and still want to do an amazing job. So it was a process, but it was a cool process, it was a learning process for sure. 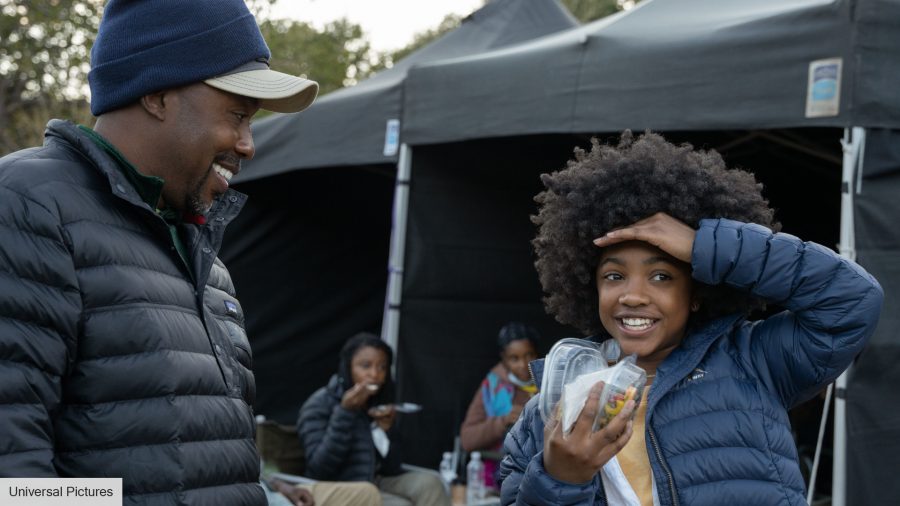 The digital solution: yes. Speaking of which, so you didn’t have real lions when you were making this movie; everything was in CGI. Was it difficult?

LF: Yeah! It was. Like, tell me, if you saw a guy in a very tight gray suit with legs, like, 10 inches wide, and then holding a lion’s head to him? I mean, tell me you wouldn’t laugh a little at that? For example, would you really be running away and scared of it? Not really.

So, you know, it takes a lot of imagination. At first I laughed, but you know, I practiced, and you make mistakes in your other stuff. So sometimes it took me a little while to get used to it. But being there for four months, I had time to train. So it’s really worth watching it because our emotions are at the top.

The digital solution: Yes, definitely. I felt some of those screams when I watched it. But, now, I want to know, what do you want the audience to take away from seeing this film?

LF: I want them to take away the family tie in this movie, really, I want them to know that no matter what your family did, or no matter if you don’t want to be in that specific situation, you can’t care you about that right now. Because what you have to do is actually you have to survive what is happening right now. I want them to see how far we’ve come from separation and fights to us pulling our strings together and bonding to help each other survive this lion attack.

HI: I think the family message is definitely just as important. But even on another note, like don’t mess with nature. This lion reacts the way he acts because someone laughed at him. Right? It’s like you left the lion alone, none of that would probably ever happen. So let it be.

The Digital Fix: While we were talking about Percy Jackson, I have to ask you, and you, Iyana? Do you have any exciting new things you can tell us about coming up?

HI: I am currently at Abbot Elementary. I have some things in the works right now that will hopefully come to fruition, and I’ll be announcing things soon. But when I’m not playing, I have a skincare line. I conceive. I like to do lots of fun things. 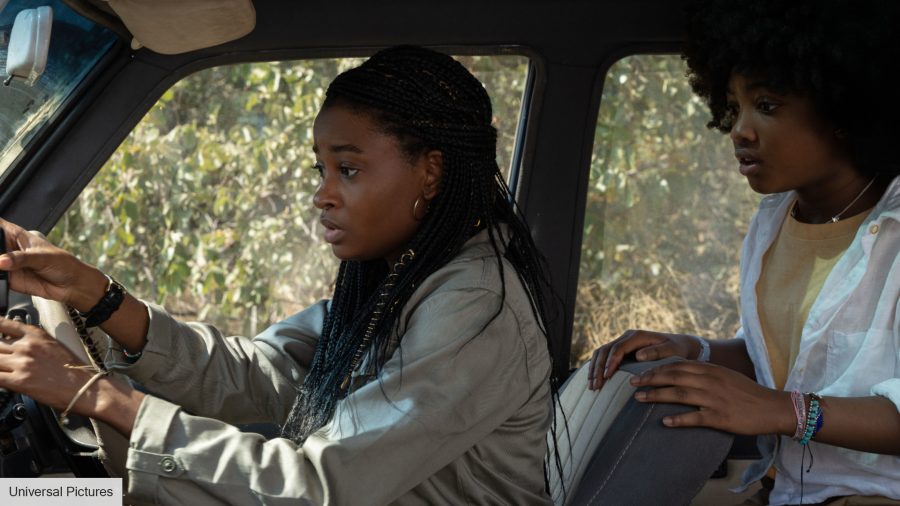 The numerical solution: last question. Obviously, you were chased by a fake lion during filming, so you might be a little hesitant, but would you ever go back to South Africa?

HI: It’s so beautiful there. I really want to go there, especially now. Covid-19 was super high when we were filming, so I didn’t get to do a lot of fun stuff. So I want to go back when you know I can explore and do more sightseeing and see different things.

Beast is in UK cinemas from August 24.

Netflix’s Day Shift review: Jamie Foxx’s vampire action flick is flashy and colorful, and yet so, so dull

Clichés aren’t necessarily a bad thing. They wouldn’t be clichés if they were, would they? With proper implementation, they can serve as a fun reference tool, function as a sort of throwback in genre storytelling, or even potentially be used to subvert their own original intent. It’s when filmmakers start piling up clichés that they […]

The coolest action movie stars of all time

Action movies tend to be filled with rough, tough, no-nonsense protagonists that audiences can’t help but root for. Many talented actors have become action stars, and their careers have been filled with awe-inspiring action sequences, memorable lines, and some of the most iconic characters ever seen on the big screen. RELATED: 10 Best Hong Kong […]

The Netflix Movie Interceptor follows the familiar path of 80s single-player action films such as Die Hard, Passenger 57 and Under siege. What is not common in action films of the 80s is that it is the story of awomen– wrecking crew, featuring Elsa Pataki like the woman who keeps fighting. Australian author Matthew Reilly […]