Few years ago, Suzerain opened, which was one of the best surprises I’ve ever experienced on the big screen. With almost no expectation, Julius Avery blew me away with his second feature, so when I learned that the filmmaker was exploring a dark take on the superhero genre, I immediately became interested in this project. Despite understanding the reasons for the “superhero fatigue” discourse, the truth is that this so-called fatigue is only mentioned when movies aren’t successful. So, since it’s a genre I really enjoy, I’ll always be invested in what the directors and writers have to offer. That said, Samaritan holds a premise filled with potential, but it fails poorly to develop its fascinating ideas in a satisfying way.

He’s the writer At Bragi F. Schut first feature script, which may or may not be the main reason why Samaritan ignores a much more interesting and emotionally compelling narrative, replacing it with a generic, predictable story about a child, Sam (Javon Walton), fanboy about his meeting with a famous superhero, Joe Smith (Sylvester Stallone). He had been missing for decades after a battle against his own brother, Nemesis. In fact, just in case anyone has unreliable expectations for this superhero movie, Walton is playing the real protagonist. Obviously, Stallone still gets a good chunk of the screen, but the story mostly focuses on Sam, the bullying he frequently suffers from, and the criminal path he follows to help his single mother pay the bills.

Nothing new or inventive here. Samaritan superficially touches on the “good versus bad” theme – done over and over again – so there are no surprises in store. Avery tries to make his film look layered and shocking with well-managed and theoretically meandering reveals, but everything feels so familiar that even inexperienced viewers won’t be caught off guard by something that can be easily deciphered after the first few minutes. There’s nothing wrong with using well-known phrases and clichés in movies, as long as they’re executed in an entertaining way for the audience. Unfortunately, two problems surround this important point… 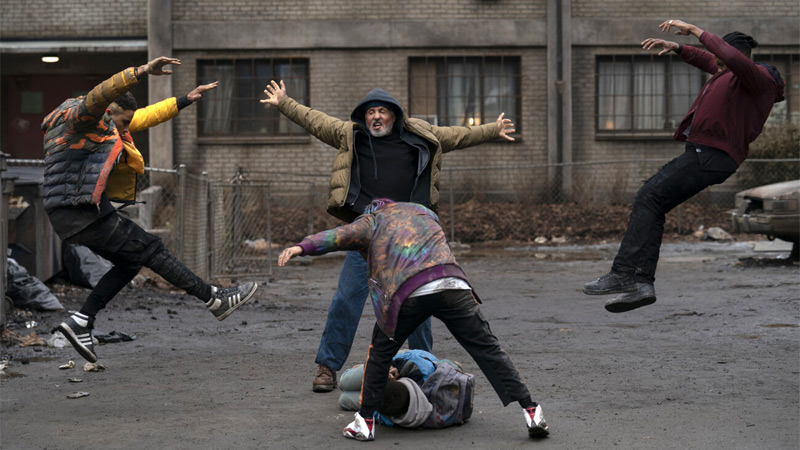 Even though Samaritan is, indeed, different from all conventional films of this genre, it is still a superhero film. Obviously, that in and of itself doesn’t mean that a movie *must* have action sequences – Joker is a great example of a superhero movie that doesn’t focus on actual combat – but it has to have something that delivers that entertainment value. The problem is that not only is the action disappointing, but there’s nothing to replace or add to it. The fight scenes are decent at best, but overall it’s just the usual repetitive toss and punch type of action. The stunt work is really impressive, though. Stuntmen are thrown left and right through every possible obstacle imaginable.

Nevertheless, the main problem is that a better story is shrunk to fit into a visually stylized narrated prologue that raises many thought-provoking questions, but they are either left unexplored or answered in a very simplistic and cheap way. Samaritan Truly boasts a thrilling premise, but refuses to delve deep into his own world’s history, ultimately undermining the symbolic Samaritan-Nemesis relationship – Stallone spends the entire movie basically replying “I don’t want to talk about it” every time someone one wonders about his past. Additionally, the action-heavy third act features a fairly conspicuous green screen and lackluster visual effects in other elements.

I want to end this review on a positive note. Composers Jed Kurzel and by Kevin Kiner score and lead performances are the saving graces. Stallone does his best with what he gets, bringing plenty of humor to a fairly bland movie. Bearing in mind that Walton was 14 or 15 when he filmed Samaritanthe young actor delivers a fine performance, though I think his character should never have been the lead in this movie if the premise had gone the more intriguing route. Pilou Asbaek plays the antagonist in a compelling and evil way, adding some well-deserved madness. With a more polished script, Avery could certainly have made a much better movie.

by Julius Avery Samaritan holds a pretty interesting premise, but sadly, it’s yet another addition to the list of movies with wasted potential. What could have been a truly dark and compelling tale about two superpowered brothers with distinct perspectives on life is instead a bland, predictable, formulaic tale with less Sylvester Stallone than expected. The cast delivers strong performances, but choosing to focus on the generic character of Javon Walton as the prologue gives way to such an engrossing exploration of the past proves to be a terrible decision. Action-wise, it lacks the energy and creativity to entertain most viewers, despite the dedicated stunt work. A bit frustrating experience overall.

Which Resident Evil game would make the best live-action movie?

With Unexplored officially in theaters, the conversation about whether video games can make great movies has once again come up. Since Super Mario Bros. The movie was released in 1993, the common consensus for many movies based on video games is no, they don’t fit the movie well. Now, whether it’s because video games with […]

Few things get the blood of an action movie buff like a good popcorn movie starring their favorite actor or actress. Whether it’s an old-school Western anti-hero like Clint Eastwood or a next-gen crime thriller like Jason Statham, the best action stars are often identified by the box-office draw. -office, familiar serialized characters, pop culture […]

the He-Man The live-action film is finally seeing progress after years of development. The new film found its main man in Kyle Allen a few weeks ago. This was after Noah Centineo from To all the boys I’ve loved before was part of the movie for a while. It now looks like MOTU the movie […]